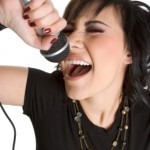 IT’S LIKE RAAAAAAIIIIIIIIN, ON YOUR WEDDING DAY! IT’S THE FREE RIIIIIIIIIIIIIIDE, WHEN YOU’VE ALREADY PAID!

Do you remember that song from 1996? Boy was it catchy! In fact, I’ve had it in my head lately because of our current lesson on irony. Since I haven’t had the pleasure of teaching 8th grade before – and irony is an 8th grade standard – I tried to come up with different ways to teach it.  I really wasn’t sure what would “stick,” so I tried several activities.

I started out by showing TED-Ed videos on verbal, situational, and dramatic irony. I then gave them a Kahoot quiz on the thre videos. To end the period, I had students complete an irony worksheet I found from ereadingworksheets.com in groups, and corrected them in class the next day.

The next lesson, I had students rewrite the lyrics to “Ironic” by Alannis Morissette.  While there is much debate online about whether or not the song contains irony or is ironic, I thought it would be a fun next step for the students.

Boy was I wrong! I think I skipped about five steps! I’ll admit that the students did well on the previous irony worksheet, but they were still in the stages of identifying irony, NOT creating it!  Here are some examples of what students came up with: 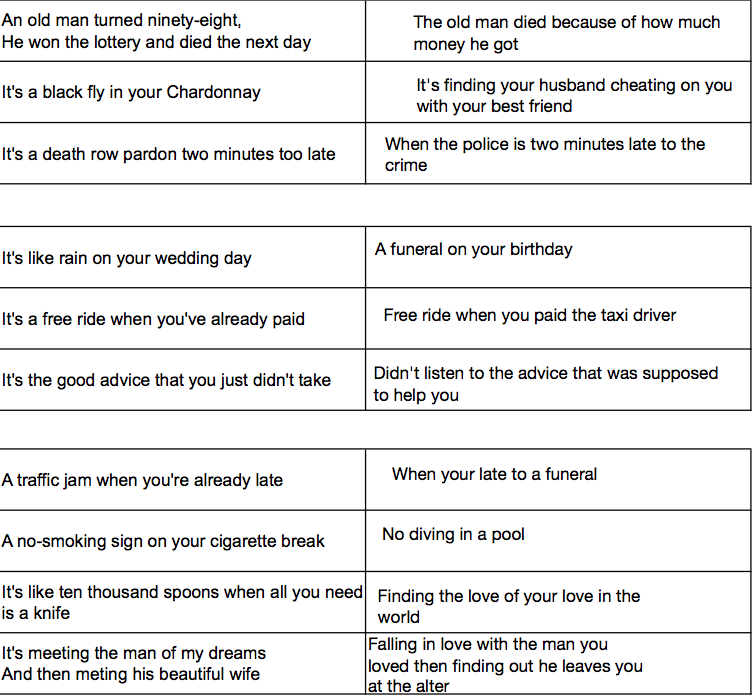 Some of these having NOTHING to do with the original lyrics! 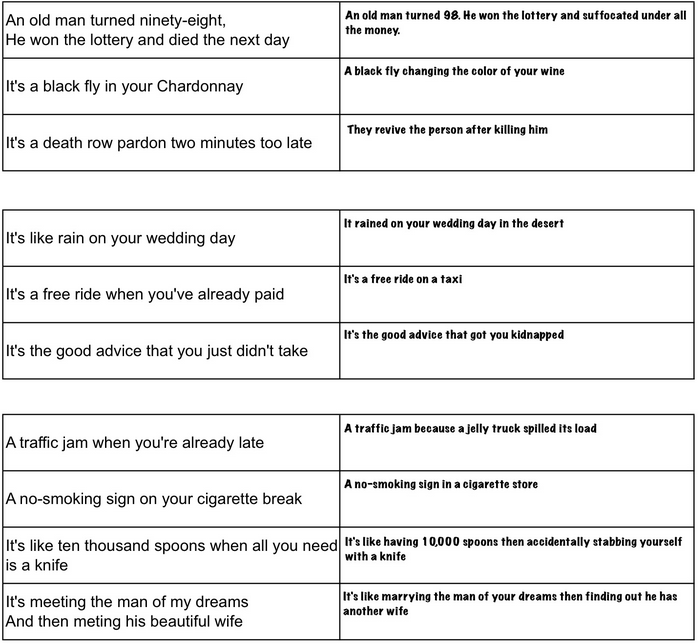 This student had a few more that were successful, however they’re still missing the mark. 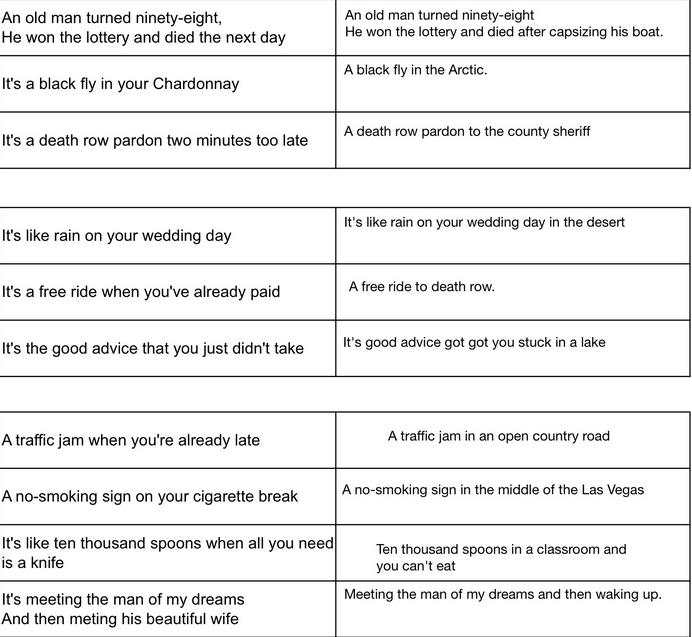 This one earned the highest grade out of my 176 students.

My conclusion: this assignment was a fail for two reasons: 1) I gave it too early, and 2) creating ironic situations is difficult.

I thought that the next natural progression would be to have the students create a quiz on irony.  They were to write questions that were a combination of verbal, situational, and dramatic irony, plus two examples that weren’t ironic.

Based on their performance on the previous lesson, I was pleasantly surprised by how they did!  Yes, there were some examples that were obviously inaccurate, but overall I was pleased.

First, I created a graphic organizer for them to plan out their quiz questions, answers, and images to accompany those questions. After they completed that, they were to create a Kahoot quiz as a group.

Here’s a screenshot of one of those quizzes. 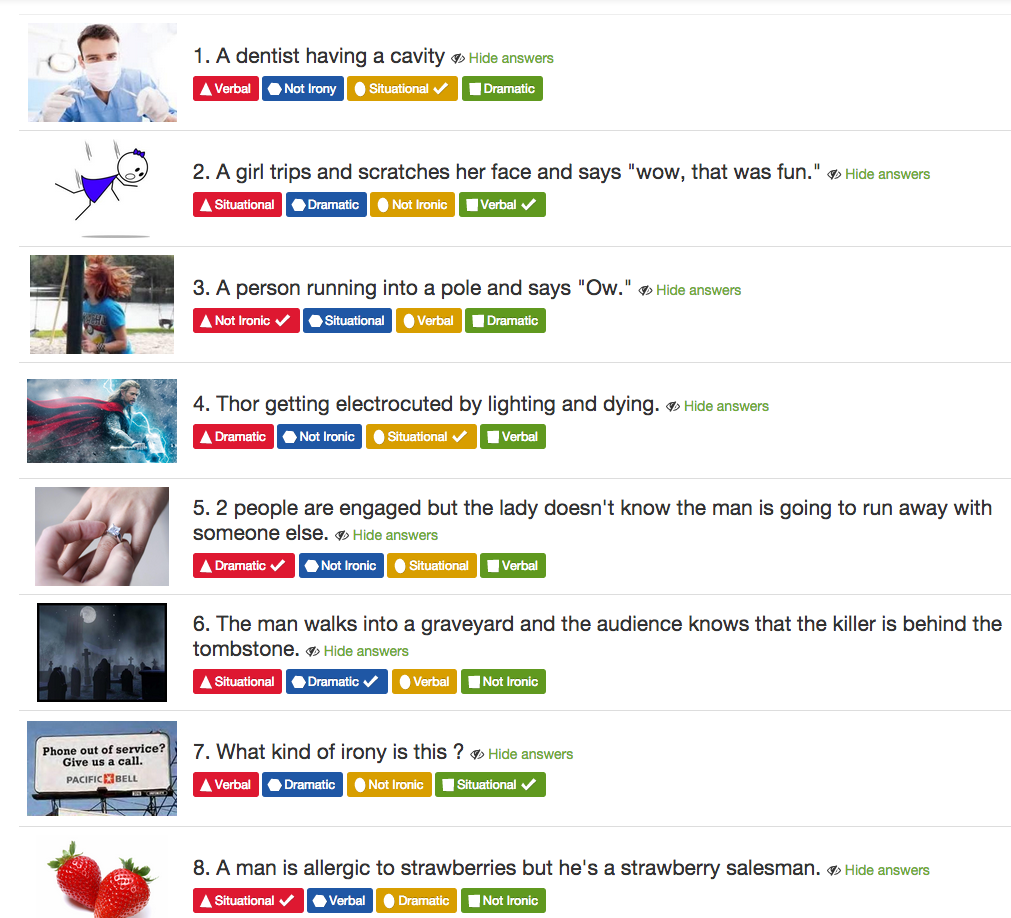 Not too bad, right?

After they created their Kahoots, I had them share them with me through the program, and then posted them on my website. I had each group play other groups’ quizzes, which they had fun doing, especially when they disagreed with the “correct” answer!

I was nervous about this part because irony tends to be more subtle in literature.

I’m testing out a service called Actively Learn that allows students to read, annotate, and answer teacher-generated questions on their iPad (I’ll give more details in an upcoming post).

I identified ten examples of irony in Flowers for Algernon and had students describe why the scenario was ironic.  For the first question, they didn’t do so well. 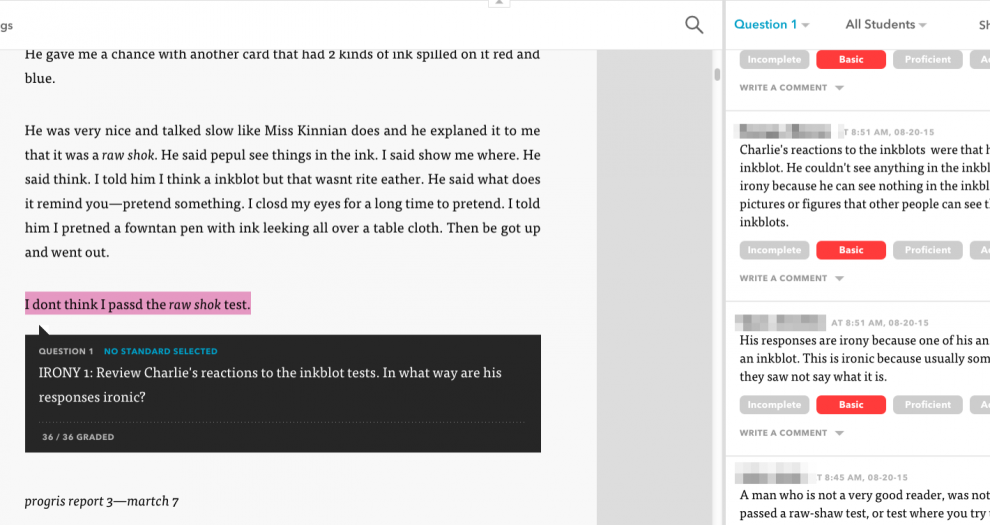 I haven’t graded the other questions completely, but I think I might need to spend more time with this.

Despite my frustrations, this has been a very good learning experience for me. While I thought I had some tricks up my sleeve, I think I need to go and ask for help, which I’m more than comfortable doing!

Scroll Up
Skip to toolbar